was designed in 1825-1844 by Georg Steenke, carrying out the commission given by the King of Prussia. 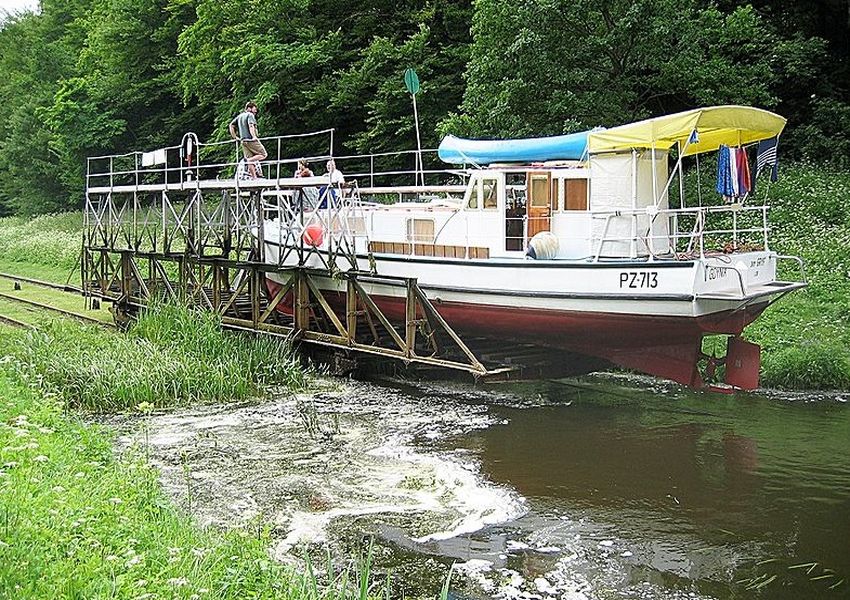 Is a canal in Poland, 80.5 km in length, which runs southward from Lake Drużno (connected by the river Elbląg to the Vistula Lagoon), to the river Drwęca and lake Jeziorak. It can accommodate small vessels up to 50 tons displacement.

The difference in water levels approaches 100 m, and is overcome using locks and a remarkable system of tracks between lakes.
Today it is used mainly for recreational purposes. It is considered one of the most significant monuments related to the history of technology and was listed by Unesco as a memorial to world culture inheritances. In Poland it has recently been named one of Seven Wonders of Poland.

The canal was designed in 1825-1844 by Georg Steenke, carrying out the commission given by the King of Prussia. Construction began in 1844. The difference in height over a 9.5 kilometres / 5.9 miles section of the route between the lakes was too great for building traditional locks; an ingenious system of inclined planes based on those used on the Morris Canal was employed instead, though the canal includes a few locks as well.

There were originally four inclined planes with a fifth added later, replacing five wooden locks. Built under the name Oberländischer Kanal (Upper land Canal) and situated in the Kingdom of Prussia, it was opened on the 29 October 1860.

Since 1945 the canal is now in Poland. After wartime damage was repaired, it was restored to operation in 1948 and is now used for tourism.
Would-be Tourists might take note, in order to not be disappointed, the canal tours do not re-open after the winter season until May 1.

The fifth incline was Calony Nowe (Neu-Kussfeld) with a rise of 13.72m, it was built to replace five wooden locks close to Elbląg.
The canal worked independently of other waterways and as a result the boats were designed within the limits of the inclines.

The boats had a maximum length of 24.48m, a maximum width of 2.98m and a maximum draught of 1.1m, they carried loads of about 50 tonnes.
The inclines all consist of two parallel rail tracks with a gauge of 3.27m. Boats are carried on carriages which run on these rails. The inclines rise from the lower level of the canal to a summit and then down a second shorter incline to the upper canal level.