Bytów - The castle of the Teutonic Knights

was built by the Teutonic Knights in 1398-1405. The major construction works were supervised by Nicolaus Fellensteyn, a master builder of the Order. The construction of the castle fell to the period when Jacob von Reinach was the procurator of Bytów and Konrad von Jungingen was the Order's Grand Master. The castle was located on a hill, towering above the town, which guaranteed excellent natural defence. 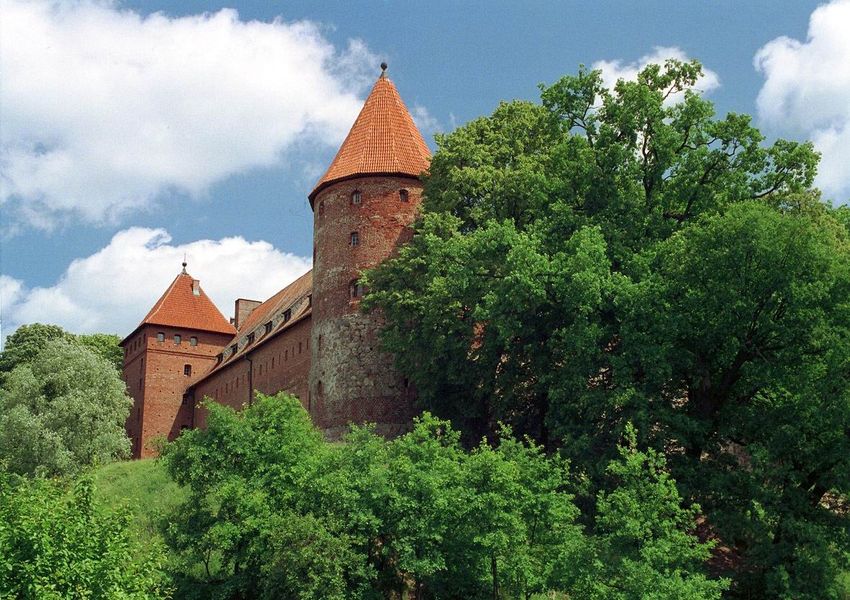 The castle, very modern for those days, was a seat of the local administration officials, a border fort and a stopover for knights arriving from western Europe to Malbork. The seat of the Bytów procurator, the castle, most probably housed from a few to more than a dozen knights accompanied by their pages and lansquenets. The complete crew of the castle could count a few dozens.

During the Thirteen Years' War (1454-1466) Bytów Castle was ceded by the townspeople of Gdańsk to the Polish King, Kazimierz Jagiellończyk. In 1454 it was granted by the King to the Duke of Pomerania, Eric II, whose family, the Gryfits, ruled the castle and the lands of Bytów until the death of the last member of the dynasty, Bogusław XIV.

The castle, enlarged by the Gryfit dukes in the second half of the 16th century, became a seat of the local administration officials in the early 17th century and a summer residence of Pomeranian dukes.

Around 1560 the castle court was redone and the construction of a new wing, known as the Ducal House, was undertaken. Once it had been completed, an identical, although smaller building was constructed adjacent to the curtain walls. This one was named the Ducal Chancery. Both exquisite buildings with imposing stairway towers turned the fortress into a Renaissance residence.

When the Brandenburgians arrived, they found the castle and the town, as well as many of the nearby villages damaged and looted by the Swedes in 1656. The Gunpowder Tower had been then blown up and most of the castle buildings burnt, leaving only the external walls. Despite many efforts, the castle has never been brought back to its previous magnificence.