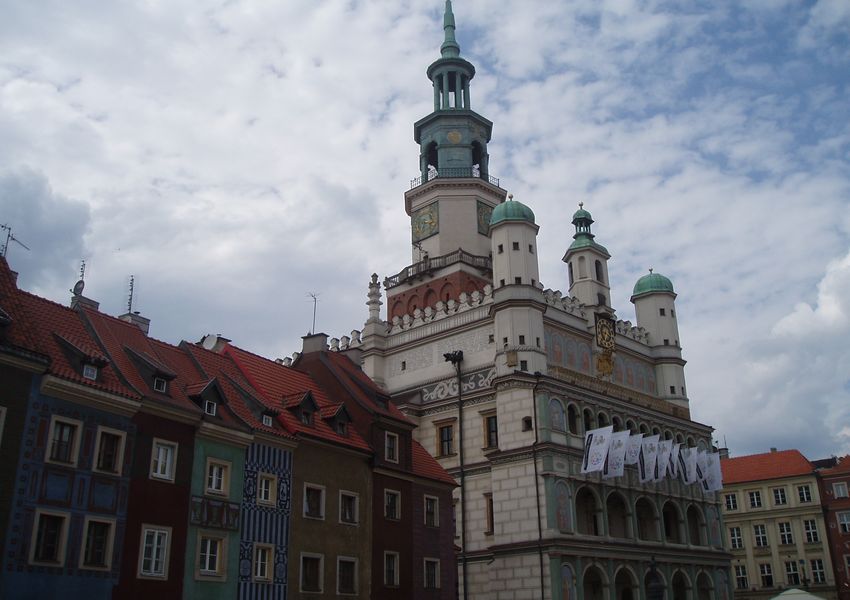 Worth mentioning is the building's façade's three-storied arcade loggia. The Town Hall's major attractions are the famous billy goats, striking at noon on the tower, as well as its rich interior and exterior decoration.

The e interior hosts Museum of the History of the City of Poznan. Its focal point is the Grand Hall, also known as the Revival Hall. It rests on two sandstone pillars, supporting the ceiling, which in turn is ornamented with polichromed sculptures.

Bamber's Well, located in the center of the Old Market Square, commemorates the German immigrants from Bamberg who, in the first half of the 18th century, came here at the invitation of the City Council to populate the nearby villages, hitherto decimated by the North War and the plague. Over years, they adopted the Polish culture, simultaneously preserving some of their native traditions and, predominantly, the beautiful, characteristic dress. The well was founded in 1915 by a Bamberg family of wine traders, the Goldenrings. On each first Saturday of August, the Bamberg immigrants' predecessors, along with the members of Poznan Bambers' Association celebrate their arrival in Poznan with a flamboyant gala.

This Baroque-Classical palace, decorated with reliefs is easily recognizable by the sculpture placed on the roof presenting a pelican with outstretched wings. In 1808, Anna Gurowska sold it to her son, Ksawery Działynski. It remained in hands of the Działynskis till 1872, the date which marks the death of Jan Działynski, the last member of the family.

The palace was then inherited by Jan Działynski's nephew, Władysław Zamoyski, who, in 1925, donated it to the Polish nation. Today, the building is the seat of the Kórnicka Library of Polish Academy of Sciences. The Red Hall of the palace, also known as the Rasberry Hall, is a place of frequent social gatherings, such as literary meetings, chamber concerts and lectures.

St Stanisław the Bishop's Parish Church is a superior example of Baroque architecture. Initially the Jesuit temple, its construction proceeded in stages since 1651 till the middle of the 18th century and required the demolition of some selected fragments of city walls as well as filling the moat. The marvelous main altar and entrance portal was designed by Pompeo Ferrari.

The building is a three-nave church with galleries over the lateral naves and massive columns in the main nave. The church strikes as monumental, pompous, literally saturated with all sorts of ornaments (e.g. sculptures, paintings, moulding) yet, all these elements instantiate an ideal example of artistic symbiosis. The nearly hypnotic play of light in the church gives the impression of its inside being slightly submerged in subtle fog.

St Peter and Paul's Cathedral is located in Ostrów Tumski, the oldest part of Poznan. It is associated with the origins of Poland and the Polish church. The building witnessed the very beginnings of the State's history and serves as the place of eternal rest for the Piast dynasty: Mieszko I, Bolesław Chrobry, Mieszko II, Kazimierz Odnowiciel and Przemysł II.

Although the vaults of the cathedral still hide the relics of pre-Romanesque and Romanesque architecture (including the fragments of baptismal fonts and supposed tombstones of Mieszko I and Bolesław Chrobry), the building's present shape resembles a 15th century three-nave basilica with a passage behind the chancel and the surrounding circular arrangement of chapels.