was built in 1350-1401 on a site previously occupied by a small Prussian fort called Lecbarg, which had been situated between two rivers: the Łyna and the Symsarna. For many years Lidzbark Castle was a residence of the bishops of Warmia and a stronghold protecting the eastern border of their domain. 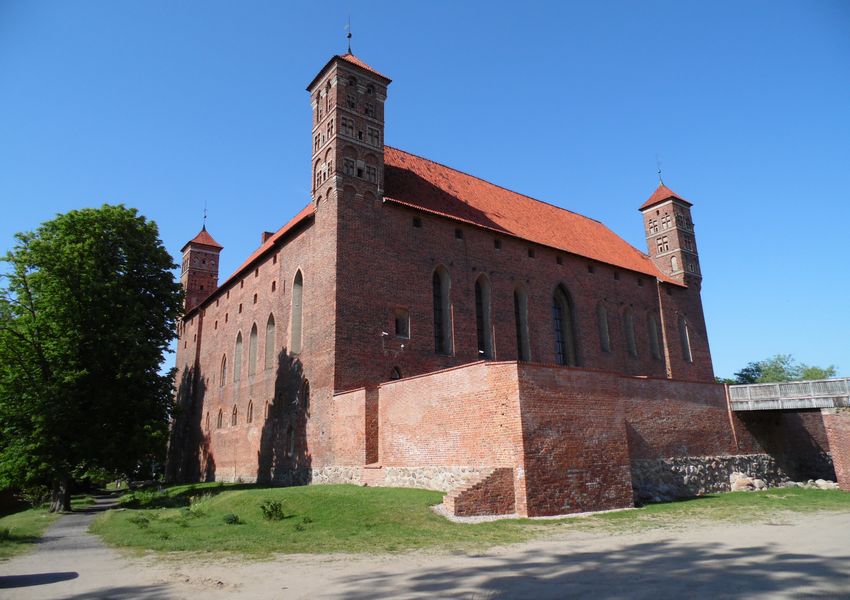 The basic structure of the castle consists of four wings enclosing the inner ward, surrounded by two-storey, arcaded wall walks, which are an only example in Poland of Gothic castle walks preserved in an ideal condition until our days.

Two settlements outside the castle walls were built around the same time as the castle.

By the power of the Second Peace Treaty of Torun signed in 1466, Warmia was incorporated into Poland. Since then until 1795 Lidzbark Castle was a residence of many outstanding subjects of the Polish kings, who represented the best of the Polish culture. They created an important cultural centre in Lidzbark, which opposed, politically and congregationally, to the Lutheran ducal court in Königsberg.

One of the bishops of Warmia was Lucas Watzenrode, a maternal uncle of Nicolas Copernicus. Owing to his uncle's influence, Copernicus bound his mature life as well as his scientific and public activity with Warmia and Lidzbark Castle. The astronomer lived at the castle in Lidzbark for eight years: first after completing his studies in Cracow, at the turn of the years 1495-1496, and then, having returned from Italian universities from 1503 to 1510.

At that time, the bishop's court shaped Copernicus' attitude against the Teutonic Order. More importantly, finding peace and quiet under the castle's roof, Copernicus was able to form the principles of his heliocentric theory, which he put in writing in the so-called Commentary. Later, he developed and completed the theory in his memorable work On the Revolutions of Celestial Spheres. While in Lidzbark, Copernicus also translated, from Greek to Latin, Letters of Theophylaktos Simokattes, which were then printed in Cracow in 1509.

Since the end of the 16th century Lidzbark Castle was slowly losing its defensive character and eventually turned into a splendid ducal court, richly furnished with exquisite pieces of furniture, libraries and arts objects. The castle rooms were adapted to serve the new function - many were divided into smaller chambers and lavishly decorated with paintings. In 1589-1599 the Bishop Anrzej Batory commissioned to build a palace adjacent to the north wing of the Gothic castle, known as the Cardinal's rooms - the palace was demolished in 1767). Another extension of the castle was undertaken by the Bishop Jan Stefan Wydżga, who added a Barque palace next to the south wing, built in 1666-1673 according to a design by the Italian architect Issidore Affaiti. The last eight Polish bishops of Warmia lived in this palace.