is a relatively modern city, but the oldest building in Gdynia is nevertheless the 13th century St. Michael the Archangel's Church in Oksywie. 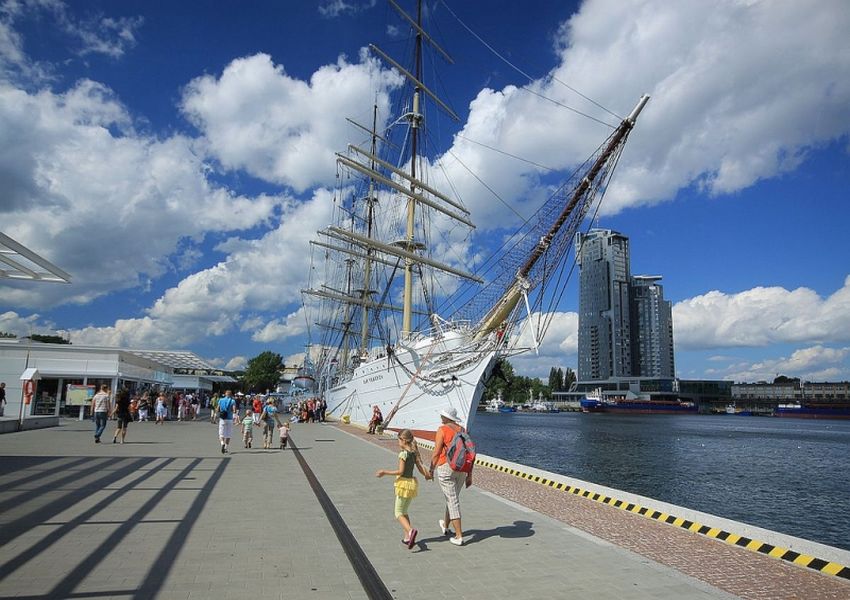 There is also a 17th century neo-Gothic manor house located on Folwarczna Street in Orłowo. However, what attracts most tourists in Gdynia deals with its recent past. In the harbour, there are two anchored museum ships, the ORP Blyskawica destroyer and the Dar Pomorza Tall ship frigate.

Gdynia is famous for its numerous examples of early 20th century architecture, especially monumentalism and early functionalism, and modernism. Great example of modernism is PLO building situated at 10 lutego street. Recently reconstructed Świętojańska street and Kościuszko square are also worth a mention.

The surrounding hills and the coastline attract many nature lovers. A leisure pier and a cliff-like coastline in Kępa Redłowska, as well as the surrounding Reservation Park, are also popular locations. A 1.5 kilometre long promenade leads from the marina in the city centre, to the beach in Redłowo. Most of Gdynia can be seen from Kamienna Góra (54 metres asl) or a newly built observation point near Chwaszczyno.

You can also take a hydrofoil or ship trip to Gdańsk Westerplatte, Hel or just see the port.

There are also two observation towers, one at Góra Donas, the other at Kolibki. The third one, on the 38th floor of the Sea Towers building, will be probably opened to visitors in 2009. Gdynia is remarkable for this construction, since at 141 meters of height, it is the tallest residential building in Poland and the country's tallest skyscraper outside of Warsaw.

Gdynia is also the host of the Heineken Open'er Festival, one of the biggest contemporary music festivals in Poland. The festival welcomes many foreign hip-hop, rock and electronic music artists every year. The second most important summer event in Gdynia is Viva Beach Party, which is a large two-day techno party made on Gdynia's Public Beach, usually held in August. Gdynia also host some events for the annual Gdańsk Shakespeare Festival.