Malbork - The castle of the Teutonic Knights

is a huge, medieval defence compound, raised between the 13th and 15th centuries by the Order of the Teutonic Knights of St. Mary's Hospital in Jerusalem. The construction works were undertaken in 1278 by delineating and building a wall around a convent castle, designed on a rectangular plan 52 meters by 61 meters externally. 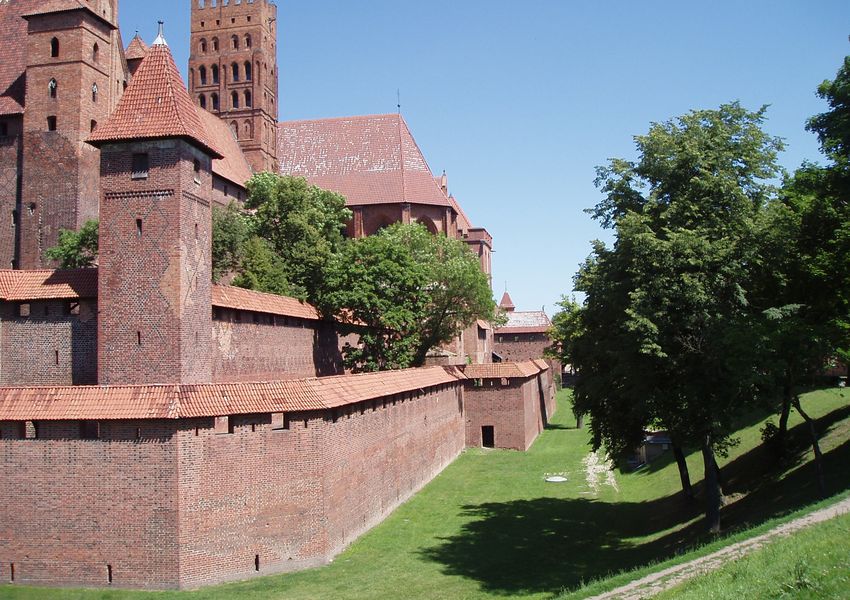 In each corner stood a tower, characteristic for Teutonic castles. In the final stage of the construction the towers were extended over the wall-walks, thus emphasising the ornate roof tops of the castle wings. In addition, they enabled castle defenders to shoot from all the angles of the fortress. In 1280 the convent was moved to Malbork.

First brother knights lived in the oldest North Wing. The West Wing, which housed the Refectory and the Commander's Chamber, was raised later. In the late 13th century the monastic castle was surrounded with a fortified wall.

Thus, spacious interwall areas were created, which served for walks and as land to build storehouses and create a graveyard for monastic brothers. At around the same time a gardrobe tower, called the gdanisko tower, was built. It could be accessed from the castle by a roofed walkway.

The tower was intended to serve as an ultimate defence site, but it also contained a latrine and its main function was to guard the access to the castle leading from the town over the bridges, and through the Bridge Towers and the Shoemaker Tower. A similar though a smaller tower, known as the Priest Tower, was situated on the opposite side of the castle compound, in the south-east corner of the fortified wall. Both towers, by flanking the fortified monastery, were an additional component of the defence system.

By the power of the second Toruń Peace Treaty signed in 1466, Malbork was ceded to the Polish kings and became the capitol of the Malbork Province. In 1772, following the first partition of Poland, Malbork and most of Royal Prussia were subjected to the Kingdom of Prussia.

As early as the 16th century, the castle of Malbork was perceived as an important monument of history and a landmark to be visited by travellers. The interest in the castle did not vane in the 17th century, when a scientific analysis of the formal architectural features of Teutonic strongholds was conducted, focusing mainly on the castle in Malbork. In the 18th century the castle was a popular destination for admirers of 'antiquities' and as romanticism and historicism began to prevail, the castle became an object of a number of studies on its history and architecture.

The first scientific inventory of the castle was completed. Many protests were issued against the demolition of the castle, which was undertaken at the turn of the 18th and 19th centuries. As a result, it was stopped in 1804. After 1815 broad-scale restoration works commenced under supervision of the most outstanding Prussian architects.

Owing to their interdisciplinary efforts the Palace of the Grand Masters was restored. The works carried out at Malbork were at that time the largest experimental field for conservation methods in Europe.
The Castle Museum of Malbork