Nidzica - The castle of the Teutonic Knights

was built around 1370 by the Grand Master of the Teutonic Order, Winrich von Kniprode, as one of the major strategic points in the defence system of the Teutonic state. The Gothic fortress was raised on a high hill, east of a medieval settlement and replaced a wooden watchtower fort of the 13th century, which had stood at the site of the present outer ward of the castle. The brick castle, surrounded with bogs and vast marshes, was like a shield for the southern part of the Teutonic state. 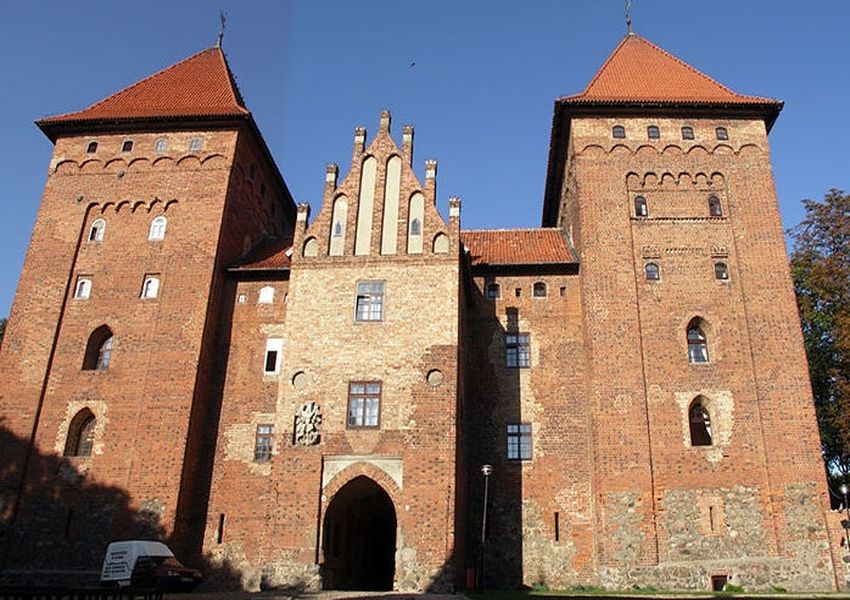 Following continual border disputes, a peace conference was summoned at the castle in Nidzica in 1389. It was attended by delegates of the Teutonic Order, Poland and Lithuania, including the Duke of Masovia Ziemowit, the Duke of Lithuania Skirgiełło, the grand commander Konrad Wallenrod, the Grand Marshall, the Grand Hospitallier and the bishops of Poznań and Pomezania.

During the Great War (1409-1410) between the knights and the Kingdom of Poland and Duchess of Lithuania, on 8th July 1410 the town and the castle of Nidzica were captured by the Polish king, Władysław Jagiełło. But in September that year the town was returned to the Teutonic Knights and the peace treaty, which ended the war, legally confirmed the Knights' ownership.

In 1656 Nidzica was attacked by Tatars, who were on their way back from the battlefield at Prostki. But the town's gates were promptly shut down and so the attackers set a camp behind the town's fortified walls, burning and looting defenceless suburbs. A young burgher, Jan Nowak, who was then staying at the castle, noticed the Tartar leader with his companions as they were sitting and feasting near a huge boulder south-east of the town. Without hesitation, he loaded and fired a canon, killing all the banqueters.

The loss of the leader caused panic in the Tartar camp. The town's authorities, fearful of what might issue of it, ordered to find Jan but he had already hidden himself in a dung heap. The Tartars, however, did not strike back. After some time Jan's wife showed his hiding place and the young man was greeted as a hero. This is what the legend says.

The chronicles of Nidzica also record the presence of the French army led by Marshalla Ney, and Bernadotte and by the generals Augereau and Zajączek; the latter organised a field hospital at the castle. The second arrival of the French troops followed by the Don cossacks fighting for the Russian tsar left the castle badly damaged.
The castle was rescued from oblivion by Ferdinand Gregorovicius, a privy counsellor, who conducted its restoration. In 1830 the works had been completed and since then the castle housed offices, private apartments and a prison.
The Nidzica Centre of Culture