Olsztyn - The castle of the Teutonic Knights

is the oldest building in the town. It was built in the 14th century and originally consisted of two wings. The archaeological research proves that the fortress was built from scratch, on a raw piece of land, where no traces of any earlier settlement have ever been found. 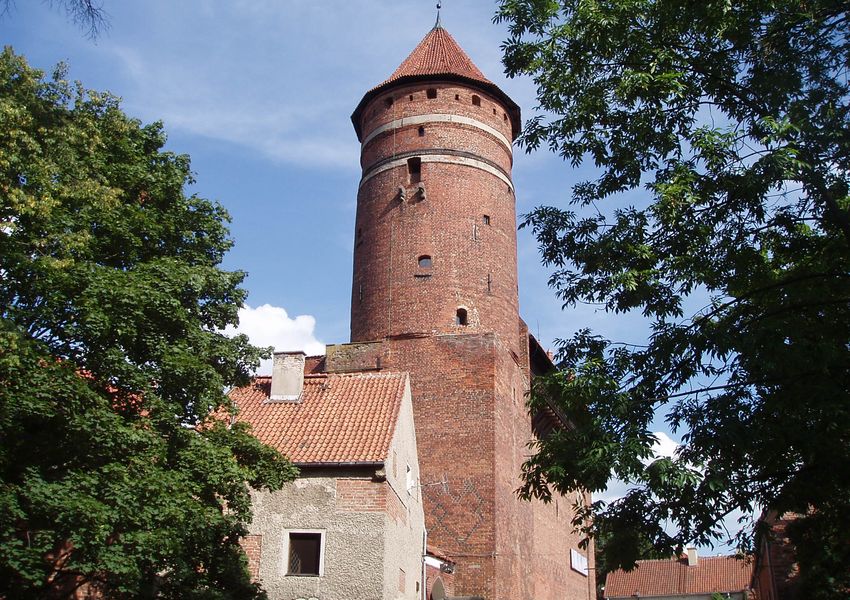 The castle belonged to the chapter of the Warmia diocese, which along with the bishop of Warmia was subjected to the military protection of the Order of Teutonic Knights until 1454. For that reason the castle played quite an important role during the wars between the Order and Poland.

In 1410, after the battle of Tanneberg, the castle surrounded to the Polish king, and in 1414 after a short besiege it was seized by Polish troops. During the Thirteen Years' War (1454-1466) the castle changed hands several times. In 1521 the Teutonic Knights threatened the castle and the town. Owing to the defence measures taken by the castle administrator, Nicolas Copernicus, they gave in after one, unsuccessful attack.

Nicolas Copernicus stayed at the castle as the administrator of the chapter property in 1516-1519 and 1520-1521. He lived in the north-east wing, in a large chamber with a view from two windows of the Łyna river and the castle mill. The third window overlooked the castle court. One door led to the castle wall walk and another to the chancery. In the early 16th century both rooms received beautiful crystal vaulting, which was rather low, but four hundred years later the rooms were made higher by lowering the floor.

As the administrator, Copernicus made many rural inspections around the chapter land estates in order to oversee the settlement matters. He made notes in a book called 'Settlement on deserted land'. The original book, which contains a number of hand-written notes made by Copernicus, is kept at the Archives of the Warmia Diocese in Olsztyn. Being the chapter administrator, Copernicus was mainly responsible for the proper management of the chapter real estates and timely collection of fees and taxes. He also oversaw the chapter's forests and towns.

Despite the burden of all those duties, Copernicus continued his scientific research. While residing at Olsztyn Castle he dealt with the reform of the monetary system in Royal Prussia. As a result, a few years later he wrote his 'Treatise on the minting of coinage'. Here, in the castle of Olsztyn, Copernicus also carried out observations of the movement of the planets, and the findings he made in Olsztyn were included in his life's work 'De Revolutionibus Orbium Coelestium'. In fact, the astronomer wrote the manuscript of the first chapter of that work while living at Olsztyn Castle.

Within the castle walls, as part of the south-west wing, there is St Anna's Chapel, built in the first half of the 16th century and consecrated by Bishop Martin Kromer in 1580. The external wall of the south wing is topped with very well preserved machicolations - protruding wooden walks with murder holes, through which castle defenders hurdled stones or poured boiling hot water or tar on heads of attackers. Museum of Warmia and Mazury