is considered the oldest city in Poland. In medieval times, the major trading routes, i.e. Morawy Silesia and Kujawy- the Coast as well as Wielkopolska - Małopolska, crossed here. Most probably, it was 1257 when Bolesław Pobozny, chartered the city and built the castle. 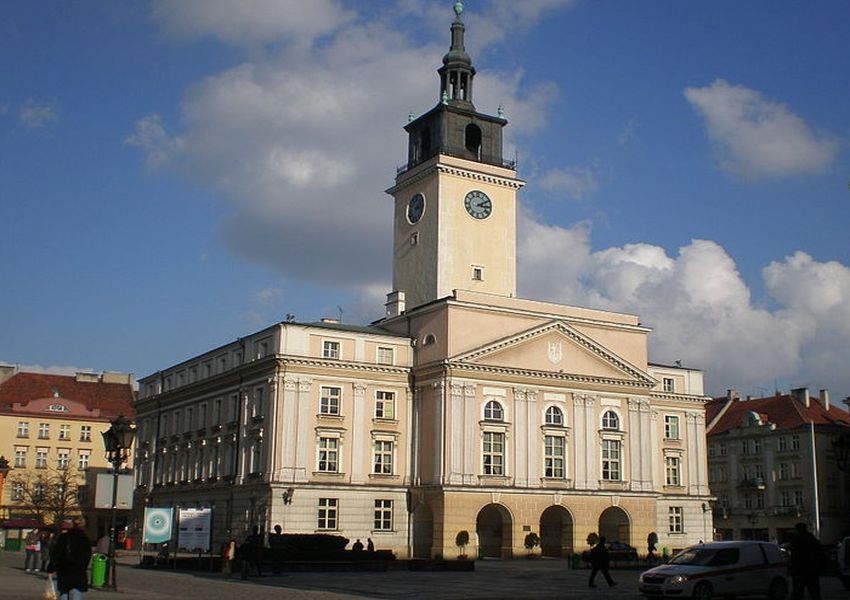 King Kazimierz Wielki surrounded Kalisz with battlements with five gates and seven or eight donjons. Some parts of the walls, six meters high, have been preserved to date. The14th century donjon Dorotka, the subject of many legends, towers above them.

The church is located between the streets sw. Stanisław, Kazimierzowska, Sukiennicza. The historical beginnings of this Gothic church go back to the13th century and its founders, Bolesław Pobozny and his wife Jolenta, later beatified.

The relics of blessed Jolenta, announced in 1880 the patron saint of Wielkopolska, rest in a silver coffin in the right nave of the church. Over ages, the church was redecorated several times. Today, its decoration emanates with the spirit of Baroque and Rococo. The objects that capture tourists' attention are the St Peter's boat-shaped pulpit, late Renaissance stuccos in naves and the main (late Baroque) altar with Franciszek Smuglewicz's painting entitled Piotrovine's Resurrection.
Cathedral of St. Mikołaj was founded in the 13th century by prince Bolesław Pobozny.

The original building had a chancel and sacristy with (preserved to date) cross-ribbed vault. From the 14th to 19th century the cathedral was in the hands of Lutheran Canons. It has mainly Baroque interior decoration. The altar, indeed very impressive, comes from 1662. It burnt down, but was later (1973) restored. In the center of the altar there is a replica of the painting entitled Descent from the Cross from the Antwerp atelier of Piotr Paweł Rubens, painted by Bronisław Owczarek. The altars in lateral naves are dated at the 18th century.

The eatre belongs to the most characteristic buildings in Kalisz. It is chronologically already the forth theater in Kalisz, built between 1919-1936, based on Czesław Przybylski's design. The charm of its Neoclassical façade is reflected in the waters of the river Prosna. The theater is adjacent to Kalisz municipal park, one of the oldest city parks in Poland.