is one of the most precious monuments of Polish Baroque. Built for King Jan III Sobieski at the end of the 17th century and gradually expanded by successive owners, it represents an unusual combination of a traditional Polish court with an Italian rural villa and a French chateau. 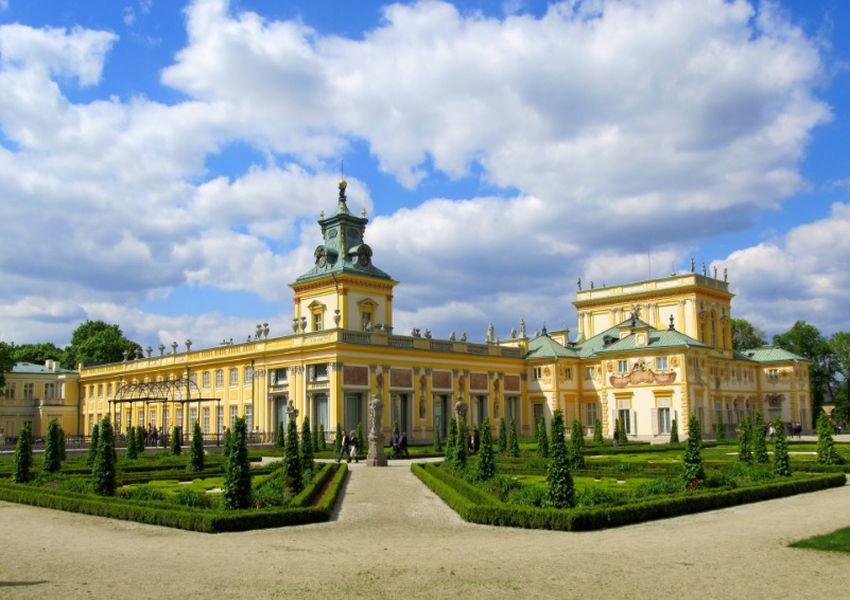 The interiors of the palace, with their original design and decadent furniture, represent three style eras. The oldest, Baroque royal apartments are located in the main building, while the south wing represents an 18th century style and the more modern rooms, decorated by the Potocki family in the 19th century, are in the northern wing.

The Crimson Hall, the Cabinet of the Etruscans, the Lapidary and the pre-Gallery Cabinet are all part of the historical museum founded in 1805.
The first floor houses the Polish Portrait Gallery of Works from the 16th to the 19th centuries, with portraits of kings, representatives of great aristocratic families, distinguished Poles and cultural figures. Among them, characteristic Polish coffin portraits and Sarmatian Counterfeits are also displayed.
The two-level garden is the 'frame' of Wilanów Palace, and somehow manages to combine a stylish Baroque garden, a romantic English-Chinese park, an English landscape park and a neo-Renaissance garden into a stylish and harmonious whole. The eastern part of the grounds are surrounded by a lake, the southern end of which has a cascading water feature, and the whole of the garden is decorated with sculptures, fountains and miniature samples of architecture.

The history of the Wilanow Palace, a wonderful Baroque royal residence, began on April 23, 1677, when a village became the property of King John Sobieski III. At the beginning, the residence built there was small. Augustyn Locci, the king’s court architect, received the task of creating only a ground floor residence of a layout typical for the buildings of the Republic of Poland. However, military successes and an increase of the importance of royalty in the coming years had a huge influence on expanding the initial project. Huge construction works were conducted in the years 1677-1696. After completion, the building comprised of elements of a nobility house, an Italian garden villa and a French palace in the style of Louis XIV.

After the death of the King, the Palace became the property of his sons, and in 1720, a run down property was purchased by one of the wealthiest women in Poland of those days – Elizabeth Sieniawska. In 1730, the Palace, for three years, was owned by king August II the Strong, who made considerable changes in the residence, particularly as far as the internal décor is concerned.

In the middle of 18th century, the Wilanów property was inherited by the daughter of Czartoryski, wife of a field marshal, Izabela Lubomirska, during whose reign, Wilanów started shining with its previous glory. Sixty nine years later, the Duchess gave Wilanów to her daughter and her husband, Stanislaw Kostka Potocki. Thanks to his efforts, one of the first museums in Poland was opened in the Wilanów Palace, in 1805.

The exposition consists of two parts: on the main floor you will be able to see the royal apartments of the palace. Rooms where parties took place, chambers where the royal couples listened to music, met their friends and guests, and where they worked and rested. On the first floor there is the Gallery of the Polish Portrait, where you can see the effigies of the Polish monarchs collected over the centuries, representatives of great magnate families, participants of national uprisings, eminent artists and people honored by Poland. Their authors are often prominent Polish and foreign painters.